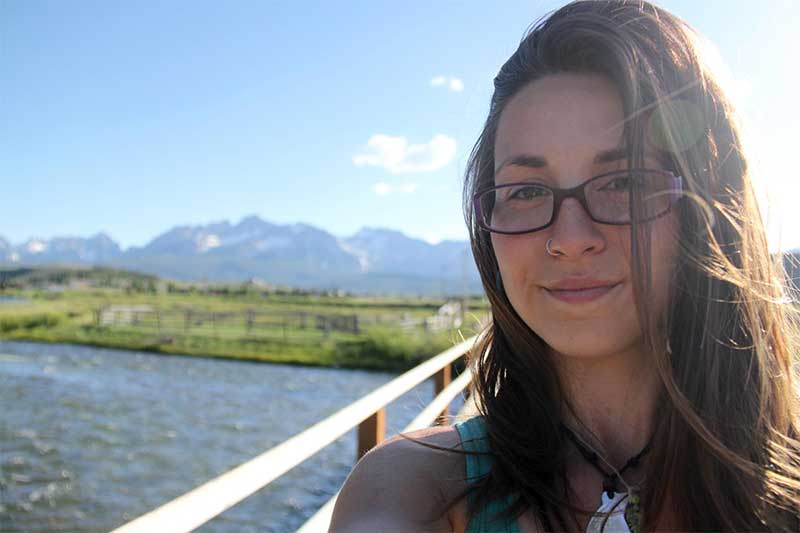 Emily Berlant is an Environmental Studies student at Southern Oregon University with a Sustainability & Policy concentration. She is on the board of Rogue Climate, a local climate & social justice organization. She was recently elected to the Talent City Council. She is an advocate for holistic waste management and waterway restoration. When she was was 19, she rowed a fully-loaded raft through the Grand Canyon. She grew up in Grants Pass, Oregon, and is frequently taking trips on the Wild and Scenic stretch of the Rogue River.

What is your relation to the Rogue River?

I’m a recreational boater. I’ve been a river guide and a shuttle driver. I grew up with the Rogue in my backyard.

What is the best quality of the Rogue?

The welcoming nature of the water.

Favorite spot on the river?

Clay Hill Stillwater or my dad’s backyard in Grants Pass.

Is there a sense of community on the Rogue River?
There can be. The river brings people together for an opportunity to detach from modern, technologically driven society and have person-to-person interactions while surrounded by a beautiful, wild landscape.

What has the river taught you?

The river is life. I learned this on the Rogue. As with the river, life has periods of slow meanderings and periods of rapid turbulence. You can plan ahead but you never know what the river or life will throw at you. You may be doing everything right, but if you’re in the right place at the wrong time, the river (or life) can flip you and scatter all your belongings – fortunately, your friends are there to help you clean up.

What is the personality of the river?

Challenging and forgiving. Quiet and dynamic.

Have you had an experience that speaks to those characteristics?

​​It was Blossom day on the Rogue. My group floated through Mule Creek canyon and approached that beautiful boulder garden just as another group began to run the rapid. The water was flowing pretty high, I can’t recall the exact CFS. One from the other group ran far left and was precariously wrapped. Others of that group were climbing up the left bank with ropes, clearly unsure of how to release this (safely but strangely) wrapped raft.

A highly-skilled drift boater in my group ran the shoot, caught an eddy, tied up and offered assistance to the rescue group. Nothing seemed to be working; they couldn’t get ropes out to the raft and even if they had, they needed momentum moving right and back into the current, not towards the shore.

My dad and I were up on the big scout rock observing and discussing. “I have an idea,” he said, as he stood up and scurried back to our (very large and heavy) raft. He pushed off, leaving me up on the rock with my camera, and entered the rapid. He caught the safety eddy and proceeded to leap from his seat, with the bow line in hand, up onto a large, slippery rock. He landed, steadied the raft, and leaped onto the next slippery rock. Between the two rocks, he managed to wrap the bowline around some smaller rocks wedged between the boulders. He was Superman. He hopped back on the raft to grab a throw bag and carabiner which he got out to the wrapped raft after multiple tosses. The man on the wrapped raft connected the rope and the two coordinated their efforts to tug on the rope as the river pressure pulsed against the raft. Eventually, the river released the raft; ropes snapped, and cheers went up.

The two groups rendezvoused above Devil’s Staircase to exchange appreciative handshakes, high fives, and cold beers. (I have pictures. It was epic.) 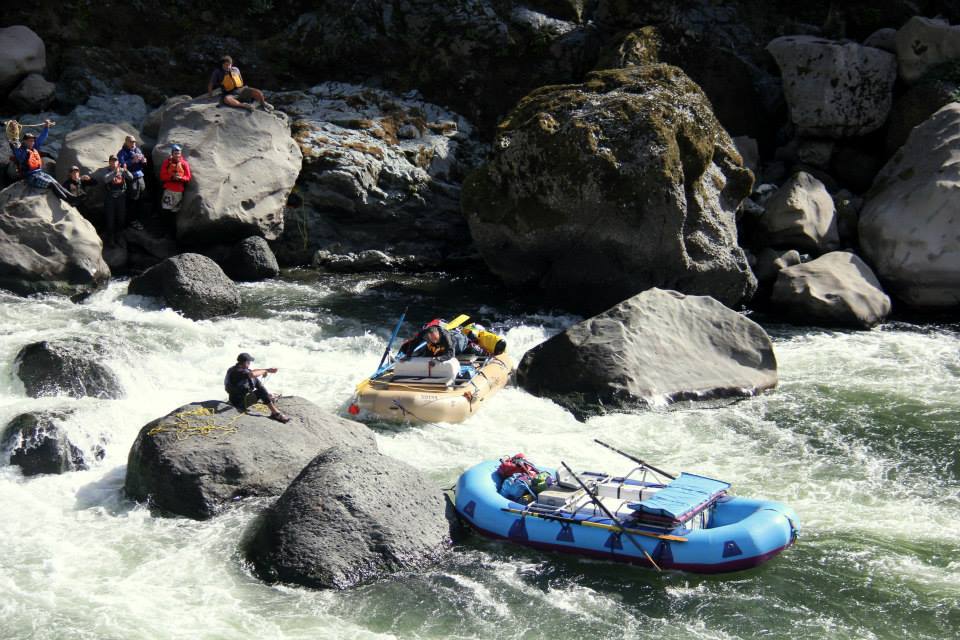 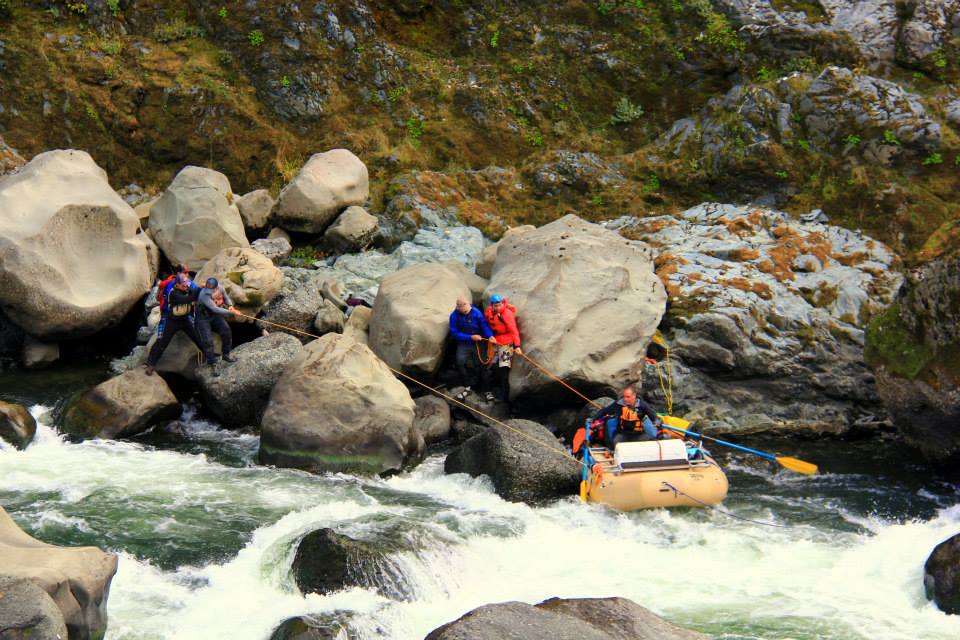 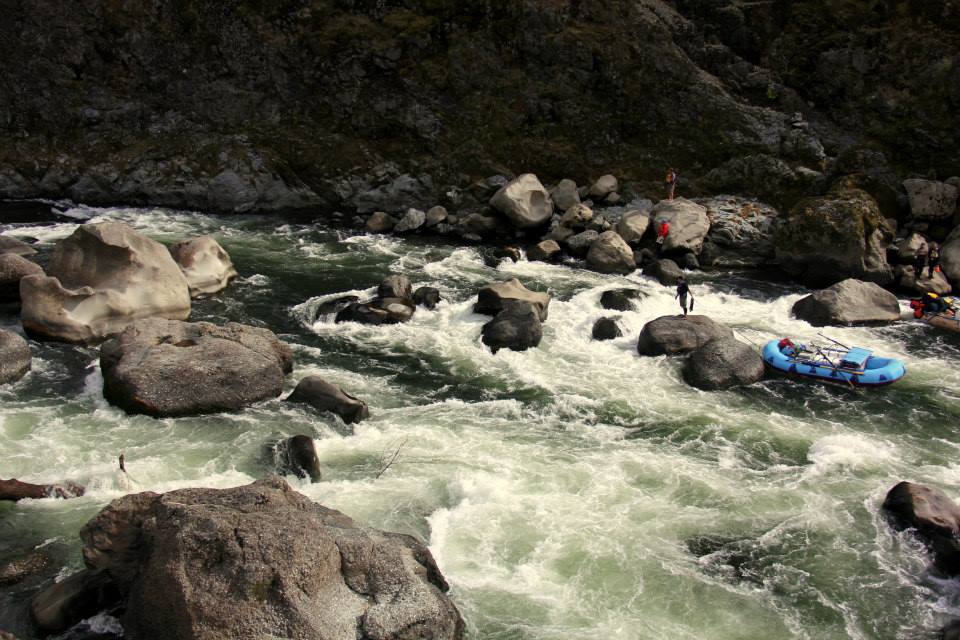